Take a comprehensive tour of James Brown sites around Augusta, led by a James Brown Family member. Reservations must be made at least 24 hours in advance. Tours depart from the Augusta Museum of History. Tours run on Saturdays each week from 11 a.m. - 12:45 p.m. Afterwards, buy a James Brown Family Historical Tour souvenir! Tour admission is $15 per person. Cost includes admission to the Augusta Museum of History - where the largest collection of James Brown memorabilia is on permanent exhibition. Call for private tour and group rates. Transportation provided by T and T Transportation.

On the James Brown Family Historical Tour, it's like taking a trip back in time.
"My dad was born and raised in this area. He was born in South Carolina May 3rd, 1933," Deanna Brown-Thomas said as she stood at the front of the tour bus.
Brown grew up in downtown Augusta in an area called "the terry."
"Basically black people territory, because it's where all the poor black people lived," Deanna explained.Little did he know those dirt roads would pave the way to a world-wide career, one that would land right back here at the historic Imperial Theater.

When James Brown, the legendary Godfather of Soul, moved his family back to Augusta, Georgia in late 1969, they settled on The Hill, in one of the city’s most prestigious and - up until then - all-white neighborhoods. “We were the first African American family on The Hill,” Deanna Brown Thomas, Brown’s daughter, recalls. “The only black family on Walton Way.”

But James Brown hadn’t always found a place among the town’s elite. As a young child, he struggled to earn pennies any way he could, shining shoes, carrying shopping bags, dancing and singing for the soldiers from nearby Camp Gordon, now Fort Gordon, located on the outskirts of town. During WWII his father was away in the Navy, leaving James with his Aunt Honey, known around town for running a brothel in the rough section of town down by the Augusta Canal known as “The Terry” (for territory, meaning the African American district). But even then he hungered for music, and cleaned floors at the Trinity C.M.E. Church, where a friendly organist gave him his first lessons on piano. 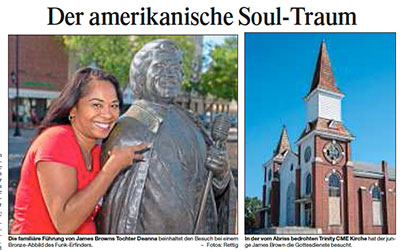 (Translated)
The death of Soul legend James Brown To be on the 25. December to the Tenth time. A Tour through his Hometown
Illuminates that Life of the Artist

CALL or RSVP ONLINE FOR YOUR TOUR TODAY
803-640-2090
A representative from the JBFHT will contact you about your request.